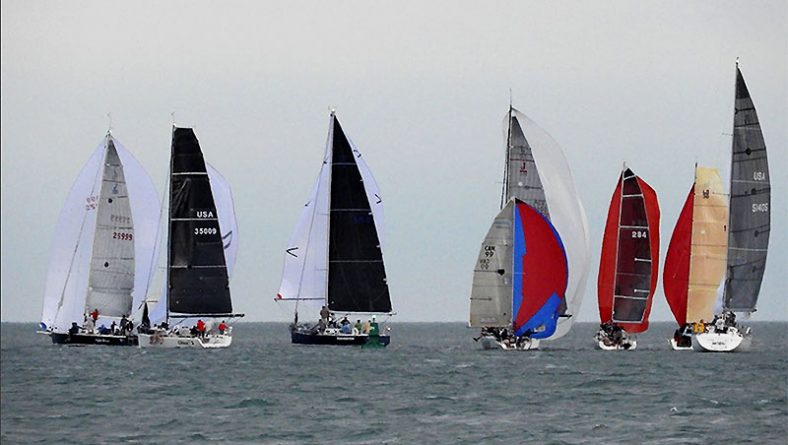 Hundreds of people will line up along the Canadian shoreline in East Windsor and on the Windsor Yacht Club patio to watch the spectacular start and finish of the 43rd annual Chimo Race set for tomorrow night, Wednesday, October 3, 2018.

The public can view the spinnakers racing from Shanfield Shores Park on Riverside Drive East, adjacent to Lakeview Marina. Windsor Yacht Club Members will enjoy the race from their patio.

This international sailboat race has developed into a very popular end-of-season event open to sailors of all clubs in the Windsor and Detroit area.

What makes this race different, is the start and finish line in the Detroit River is right in front of the Windsor Yacht Club. The fleet then heads out into the middle of Lake St. Clair where it completes the 7.2-nautical mile course. Any boat can win.

“This is a great way to culminate an extremely successful 2018 sailboat racing season,” said WYC Commodore Ted Saxby. “The Chimo Race has grown in popularity over the years and everyone looks forward to it. Its start is always a crowd-pleaser.”

The club’s race has grassroots origins. In 1975, WYC Members Ken Crooks and Cy Lane were having dinner and talking about a fun way to end the sailing season. They needed at trophy for the race. Cy and Beverly Lane had just bought themselves a new Hughes 29 from a factory outside London, Ont. The Hughes Boat Works gave Cy a half model along with his new boat. He called the new vessel Chimo and offered the model as the trophy and the race was named after his boat.

The word Chimo means ‘I am friendly’ in the Inuktitut language of Northern Canada. Since the race was in cooler weather the original organizers thought it was a good fit. Originally, the trophy could only go to a WYC boat. In later years, it was combined with a sculptured aluminum sailboat made by Canadian artist Ron Hoselton and could be awarded to any boat regardless of the club it came from.

Winners will be formally honoured at a private awards banquet Saturday, October 13th, at the Windsor Yacht Club, where the trophy permanently resides. Last year’s winner of the Chimo Race was Mike Kirkman and Hot Ticket, a 40-foot sailboat from Bayview Yacht Club.