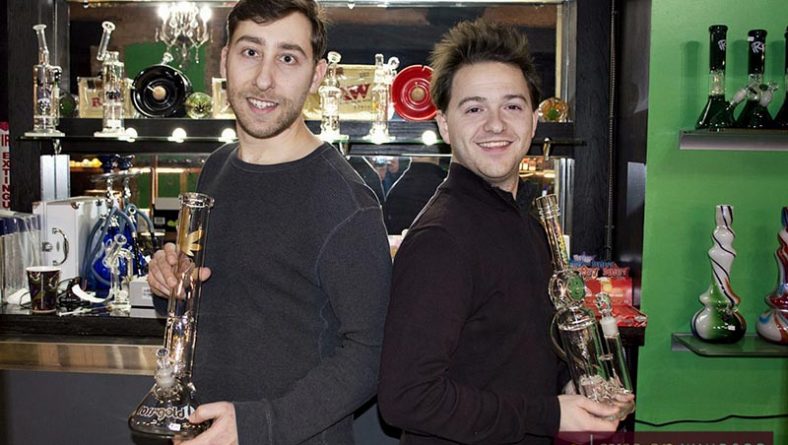 Canada’s largest cannabis vapor lounge, Higher Limits Apothecary and Lounge, is celebrating the last 420 ever before cannabis legalization with, as the owners say, “the nation’s biggest indoor 420 party” on April 20, 2018.

(Photo above: Higher Limits, co-owners Alex Newman (left) and Jon Liedtke (right) are set to hold the final 420 before national cannabis legalization with the biggest indoor party in Canada, dubbed 420 YQG, at their location in downtown Windsor. Photo by Eric Bonnici / Eyes On Windsor.)

A press release issued by Higher Limits states that they are hosting the biggest and most important cannabis event pre-legalization Windsor has seen.

For years cannabis activists, enthusiasts, medical users and those who simply enjoy cannabis have advocated and spent their April 20ths fighting for legalization.

This 420 is the last prior to legalization. Canada is the first country in the developed world to legalize cannabis. Despite Michigan being one of the biggest medical cannabis states in the USA, tourists are flocking over to Windsor to experience Canadian cannabis culture. With 7.5 million American cannabis consumers within a 3 hour drive of Windsor, Ontario, Higher Limits felt they needed to host a celebration.

“We’re pulling out all the stops,” professed Jon Liedtke, co-owner of Higher Limits. “We’ve brought in artists specializing in cannabis tattoos, we’ve got a terpene bar to infuse your drinks and dabs, we’ve also got educational workshops, a craft fruit bong station, a pizza party, and morning yoga!”

April 20th for many years has been a day of protest, and this year it’s a day of celebration, but also a day to press forward.

The day will be used to organize protests and rallies to ensure the SENSIBLE regulation of cannabis in Ontario. Higher Limits has invested in a workshop/classroom that seats 20 and will be rolling out classes about all things cannabis, including: activism, tourism, employment, advertising, sales, marketing, entertainment, and everything in between.

Higher Limits is proud to continue fighting for SENSIBLE cannabis policies and are leading the way for Windsor cannabis users.

Dubbed the 420 YQG event, the day will kick off at 10am with “Higher Yoga” (usually held on Sundays and known as Canna-Yoga) featuring a “smoke and stretch” followed by party time. Some highlights of the day will also include a watermelon bong (made out of an actual watermelon), rolling of a giant 3oz joint, pop up vendors, sales at the Higher Limits 420 Shop, prizes and raffles, a 420 Canna-Pinata filled with prizes, and more.