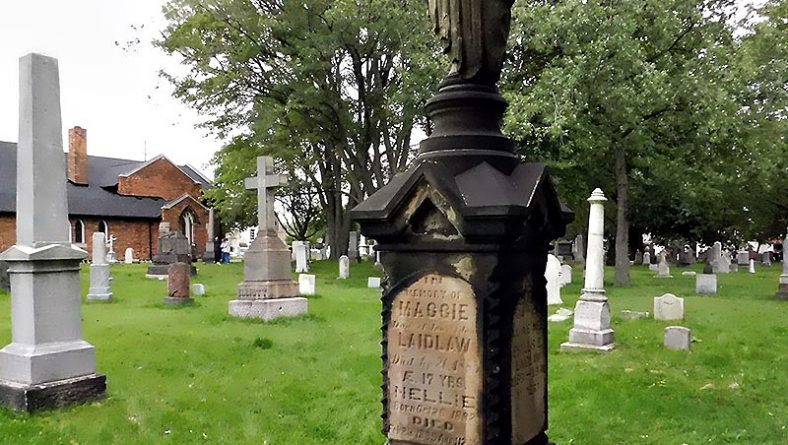 (St. John’s Anglican Cemetery in Sandwich Town was open to the public during Doors Open Windsor on Saturday, September 22, 2018. Photo above by Robert Tuomi / Eyes On Windsor.)

Although this weekend’s city-wide event was dubbed Doors Open Windsor, one of the most popular sites actually had no doors. A steady flow of visitors were found touring the cemetery next to Sandwich Town’s St. John’s Anglican Church. And for good reason. Peter Berry, a volunteer at the Church, told Eyes on Windsor about the historic significance of the burial ground.

It is the final resting place for many of the men and women who built the foundations of Canada. This, he emphasizes, attests to the importance of Windsor and Detroit in Canada’s earliest days.

Some of the history of the adjacent church is rather amusing including the reason parishioners used to lick its doors. The hardy wooden doors, explained volunteer Bill Jones, were made from whisky producer Hiram Walker and Sons’ Cyprus casks. It is not uncommon for a bit of the whisky to migrate to the barrel’s walls, which the churchgoers were not hesitant to enjoy. 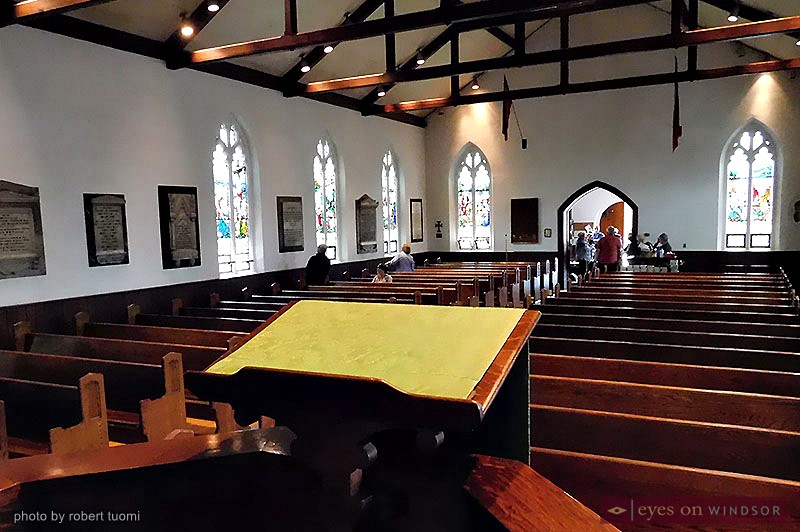 A view from the lectern inside St. John’s Anglican Church in Windsor, Ontario’s Sandwich Town during Doors Open Windsor on Saturday, September 22, 2018. Photo by Robert Tuomi / Eyes On Windsor.

Eighty-eight year old Jones is somewhat of a legend in the graveyard. The former computer instructor at St. Clair College joined the industry in 1958 working for Chryslers, as the local automaker is most often known. For the past 40 years he has dedicated his time to looking into the history of the pioneers buried there including the stories behind its oldest tombstone. A four sided monument, it is a marker for the members of the Mears family and was placed in the cemetery in 1793 following the death of family member Margaret Wilson of Amsterdam, New York. 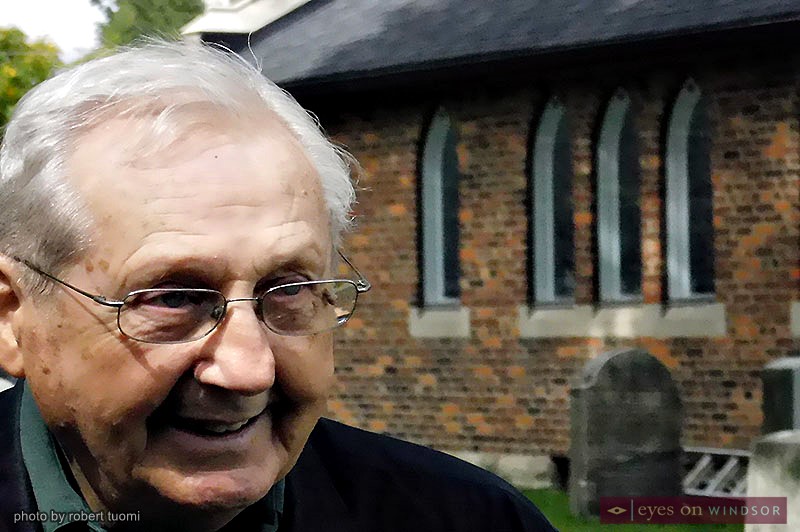 Of particular interest to Berry, are the tombstones of those with military service. While 75 have been identified, he thinks there are many more. Sometimes the monuments have not stood the test of time including the one of L.S. James E. Silk. It was what first brought Berry to the cemetery after hearing of the tragic sinking of the HMCS Skeena during a storm in Reykjavik, Iceland’s harbor in 1944.

Silk was 24 at the time. His final resting place is at a memorial in the country’s capital established to honour the lost sailors.

Berry was instrumental in restoring Silk’s monument with financial help by the Questers, a group with a focus on local history and culture. Windsor’s chapter, the first in Canada, was granted its charter in 1967. 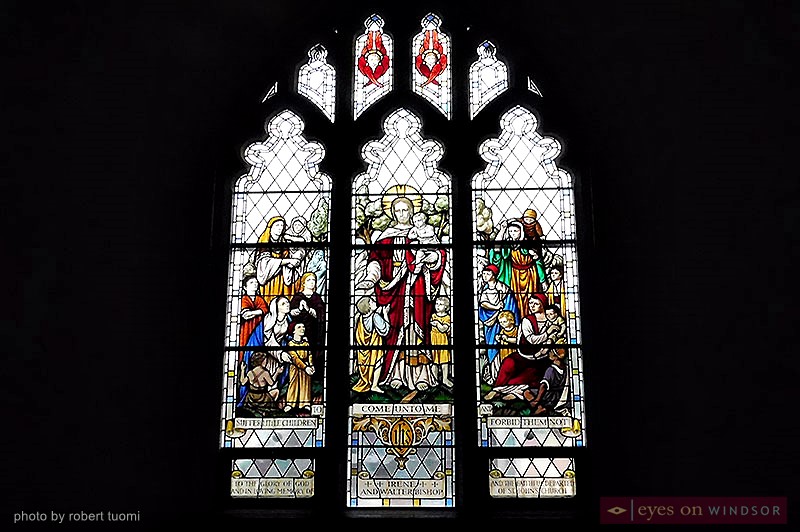 One of the oldest houses in Sandwich, if not the oldest, was probably erected in 1797, a year before the historic Baby House in the old town was completed. Evidence supporting this is a King George III deed. 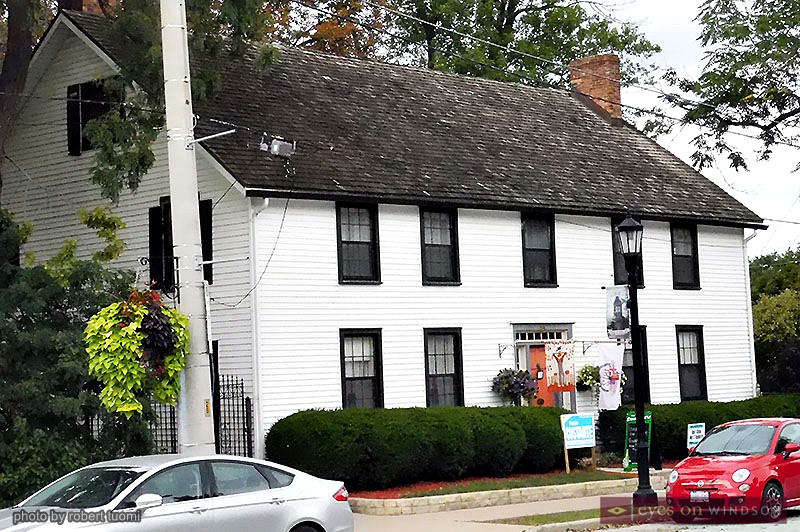 Today the 221 year old edifice is known as the Old Towne Bake Shoppe, a first floor business operated by local community activist Mary Ann Cuderman. Doors Open visitors were in for a rare treat, a full tour of the building’s two levels. They found its spacious rooms outfitted with antiques but what was most remarkable is the workmanship of the structure. In particular, its rock solid stairways do not squeak when used. 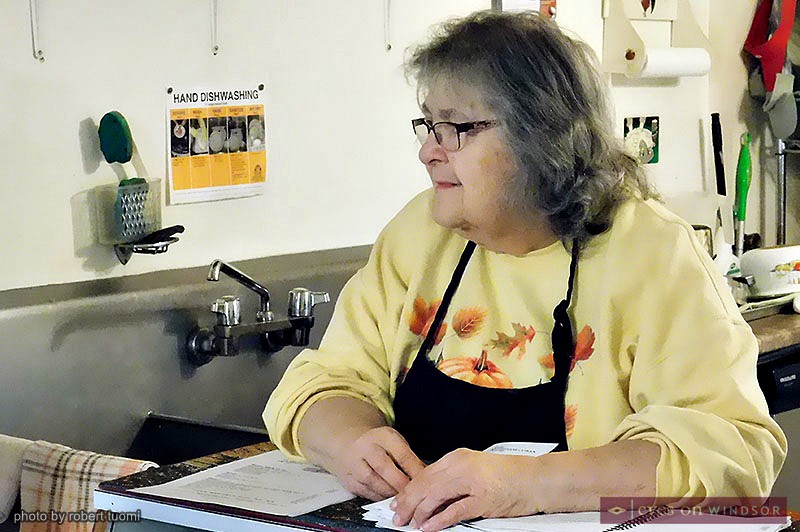 And, despite its age, the house does have modern amenities, including forced air heating, an obvious more recent addition. 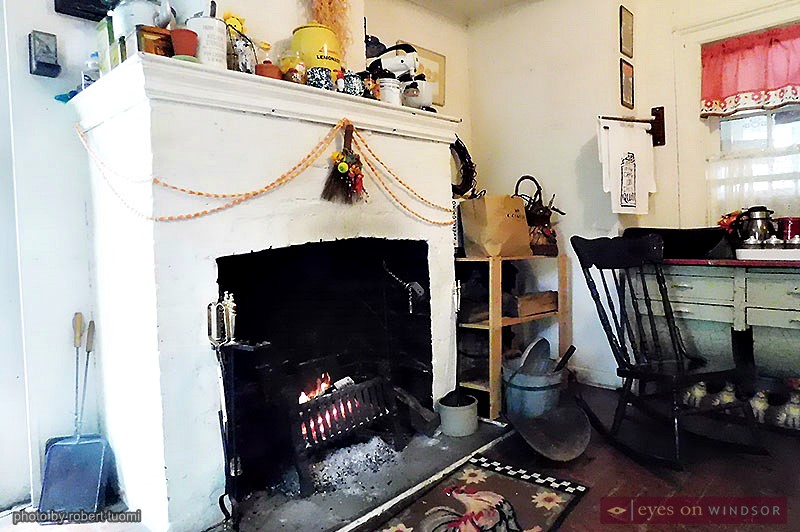 A fireplace inside the Olde Towne Bake Shoppe in Windsor’s Sandwich Town shown during Doors Open Windsor on September 22, 2018. Photo by Robert Tuomi / Eyes On Windsor.

Sandwich is one of the most historic places in the country with an eclectic mix of architecture including a house built reminiscent of those housing the slaves who toiled on southern United States’ plantations. Some of them managed to escape slavery and followed the path of the Underground Railroad to a new life in Sandwich and brought this bit of historic style with them. 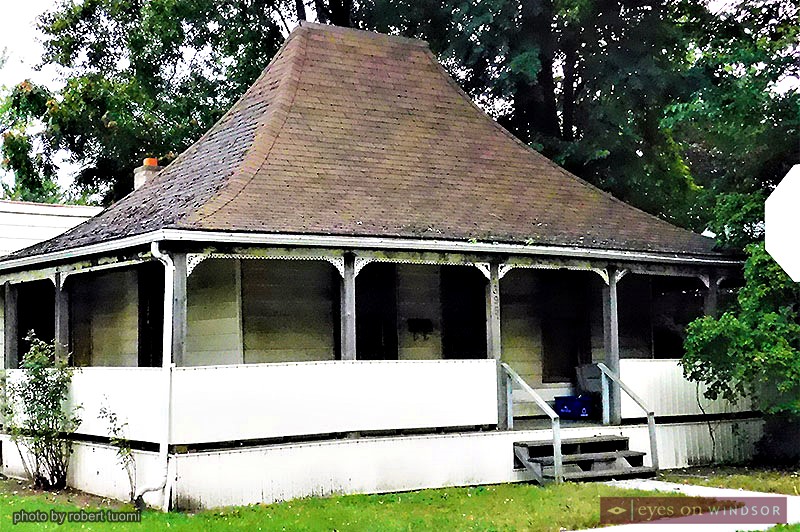 A home in Windsor’s historic Sandwich Town resembles the architectural style of those in the Southern United States which were occupied by slaves working plantations. Photo by Robert Tuomi / Eyes On Windsor.

Editors note: The Doors Open Windsor Tour is an initiative to open up buildings that would not normally be accessible to the public. This celebration of our built heritage comes around only every two years.