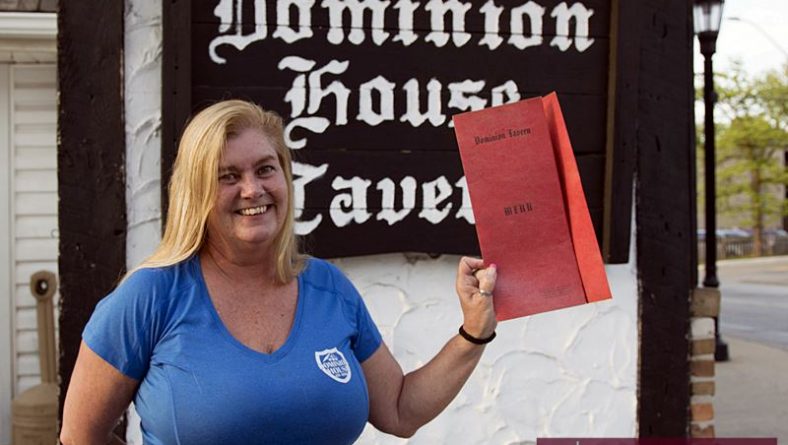 The Dominion House Tavern (The DH), set to celebrate their 140th birthday on May 18 to 20, will showcase memorabilia from the pub’s past, including old photographs and a vintage menu.

(Pictured above: Dominion House Tavern bartender, Kim Bigelow, holds a vintage menu, part of the pub’s memorabilia display of it’s history that will be showcased during their 140th Anniversary weekend. Photo by Eric Bonnici / Eyes On Windsor.)

Co-owner Jordan Tough (known to patrons as Jordo) spoke to Eyes On Windsor about the upcoming anniversary celebration. Jordan told us his team has been busy gathering items which will highlight Dominion House Tavern’s rich history. We have a room upstairs with items that will be on display and behind the bar is an old menu we found. He pulled out the menu and pointed to the “Steak & Chops” section, “in the old days you could get a sirloin steak for $1.50,” said Jordan. Also on the menu was a T-Bone steak for $2.50, and a club house sandwich for 95 cents! When asked how old the menu was, Tough said they can’t figure it out but at those prices it has to be pretty old. 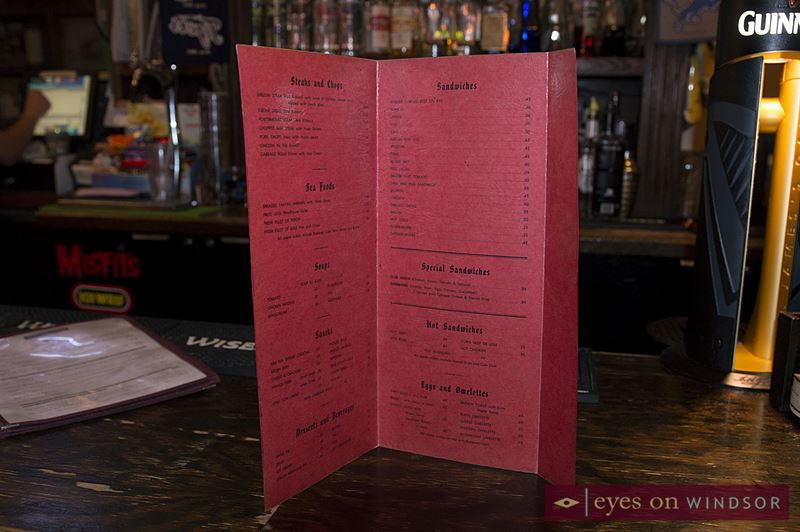 A vintage Dominion House Tavern menu, to be part of a memorabilia display at the pub, standing on the bar top on May 16, 2018. Photo by Eric Bonnici / Eyes On Windsor.

During the DH’s anniversary weekend patrons will enjoy a special deal from the current menu. The pub’s famous BAM BAM Burgers will be on for just $2.25 all weekend long. In addition to the burger, customers rave about the unique and tasty pulled pork egg rolls. The diverse menu offers a wide selection of amazing food and beverages to enjoy.

Jordan along with Rob Rosati, who was tending bar during our interview, have joined the ownership team as of 2018. Rob has been an employee and manager of The DH for almost 14 years. Rob is and always will be a household name at the Dominion House. Jordan Tough has been with the DH for over 3 years as a bartender and is the house handyman as well. It goes without saying that owning a 140 year old building requires a handyman on site at all times. The addition of Jordan to the team satisfies that need. Rob and Jordan will continue to welcome patrons from behind the bar on a daily basis. 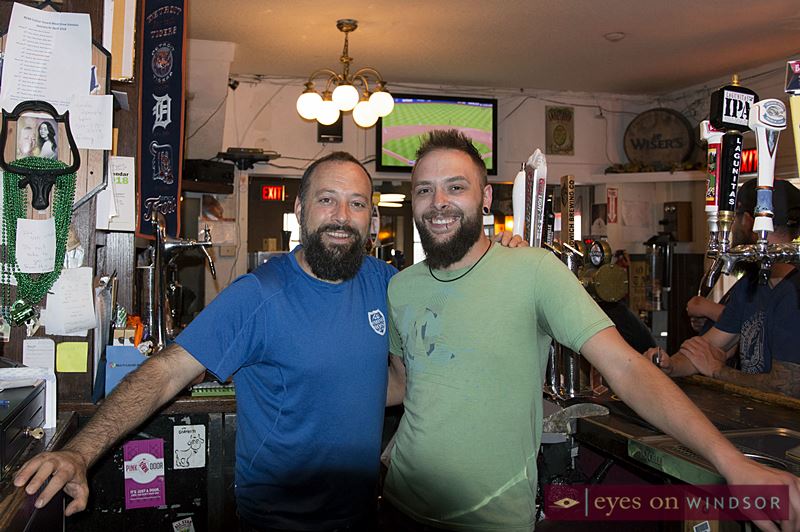 As of 2018, Robert Rosati (left), and Jordan Tough (right) are co-owners of The Dominion House Tavern (joining the partnership with Chris Mickle and Billie Jo Zacher). Rosati and Tough are all smiles here on May 16, 2018, as they prepare for the pub’s 140th Birthday. Photo by Eric Bonnici / Eyes On Windsor.

For the last 7 Years ownership has changed a few times with Chris Mickle and his partners. In 2017 Billie Jo Zacher joined the ownership team after an unexpected closing of her restaurant, Billie’s Place. Her restaurant was located just a short block away from the Dominion House, on Sandwich Street. The business closed because the building was deemed unsafe by the City of Windsor. It was quickly torn down. Billie Jo was actually an employee of the DH from 1993-2003. ” Billie Jo joining the team was more of a homecoming and the welcome home party still Continues to this day,” states a press release the DH sent out to announce their 140 year anniversary.

In addition to great food and beverages, 5 Against One, A Tribute To Pearl Jam based out of Southern Ontario, will rock the historic pub on Saturday night as part of the festivities. On Sunday afternoon enjoy live Blues entertainment featuring the energetic South River Slim, and a performance by Windsor’s Soul Delegation. 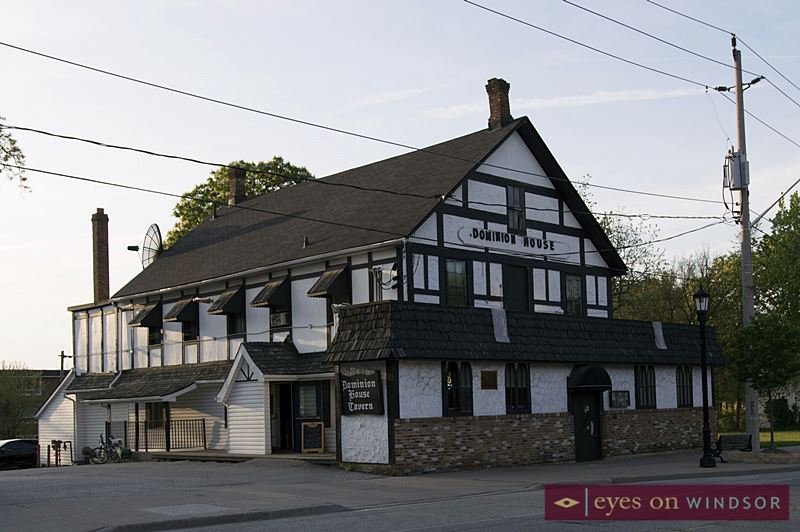 Located in Windsor’s historic Olde Sandwich Towne, Dominion House Tavern, established in 1878, is the second oldest pub in Ontario, thirteenth oldest in Canada, and oldest in the border region.

Generations of patrons have visited the DH. In the early days, farmers would often stop during their trips to transport produce to Detroit’s Eastern Market. Judges, juries, and lawyers frequented the DH up until the 1970’s when the Old Sandwich Towne Courthouse closed down. While the Ambassador Bridge was being built in the early 1900’s many construction workers frequented the DH. Famous politicians, sports figures, and celebrities have stopped in over the years.

During the anniversary visitors will have the opportunity to meet past patrons, owners and employees to celebrate the rich history that the DH has been serving up for 140 years. 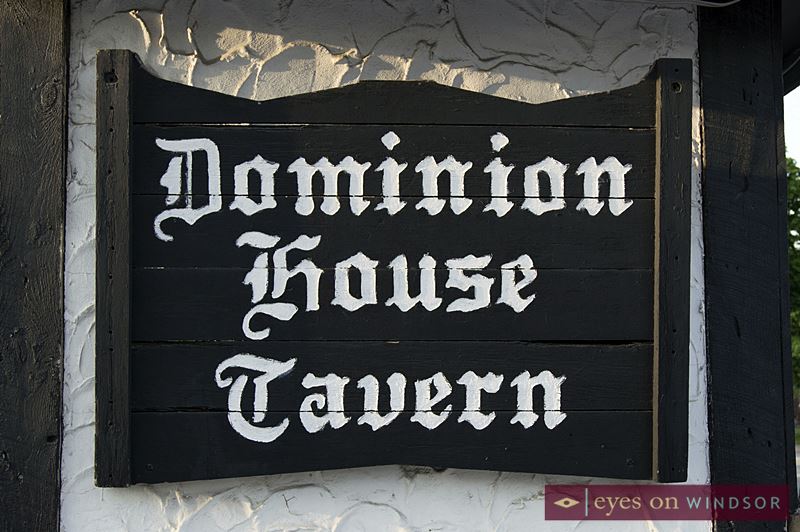 Dominion House Tavern sign hangs on the wall outside the heritage pub. Photo by Eric Bonnici / Eyes On Windsor.