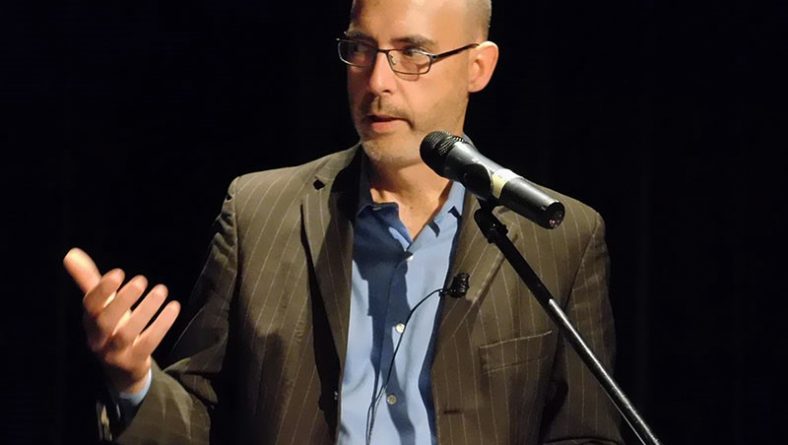 (Author Michael Barclay discusses his book The Never-Ending Present, the story of Gord Downie and The Tragically Hip, during Bookfest Windsor on Oct. 20, 2018. Photo above by Robert Tuomi / Eyes On Windsor.)

A year ago, almost to the day, Canada lost one of its revered music icons, Kingston’s Gord Downie, original front man of pure Canadian rock band the Tragically Hip. Even before the sad day for fans across the nation, musician turned music reporter Michael Barclay, in the summer of 2017, was already conducting as many as three to four interviews a day to get as much background on the Hip, and Downie, as he could.

In April this year, less than eight months following the extensive interviewing, he released “The Never Ending Present – The Story of Gord Downie and the Tragically Hip.” 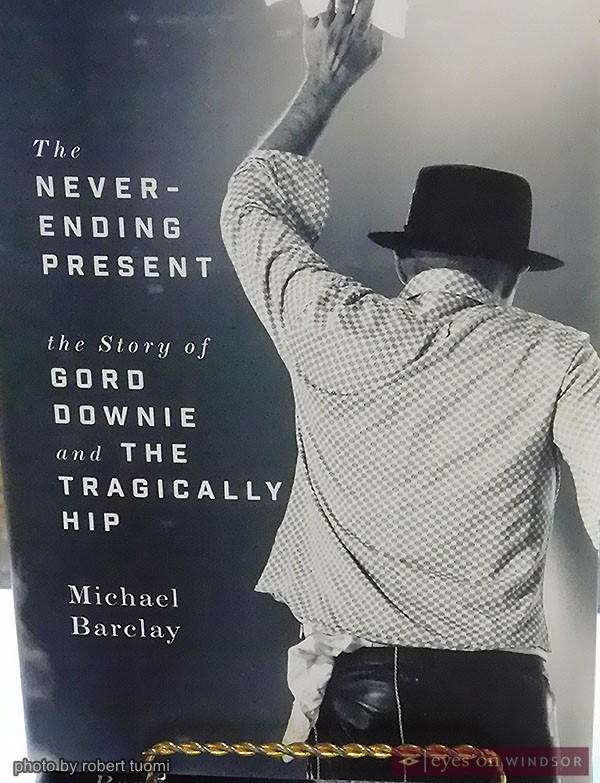 Michael Barclay’s book The Never-Ending Present, the story of Gord Downie and The Tragically Hip, on display during Bookfest Windsor on Oct. 20, 2018. Photo by Robert Tuomi / Eyes On Windsor.

Conducting these interviews, revealed Barclay, was the hardest and saddest part of the writing process. He was talking about a person he and his interviewees knew, although still living at the time, was in dire health.

The book brought Barclay to Windsor for the first time in about twenty years. His first trip was a performance at downtown’s Phog Lounge with his band that many years ago. Now he was one of the authors featured at this year’s Bookfest, in a panel discussion inside the Capitol Theatre’s Kelly Theatre simply titled “The Never Ending Present.”

Despite suffering un-operable brain cancer, musician Downie kept touring, taking control of his illness as best as he could. But, as Barclay relates, his demise was becoming evident, particularly notable in Downie’s loss of memory.

It turns out memory is one an author’s greatest challenges. Not so much the author’s but that of his subjects. Barclay’s book is both non-authorized and somewhat non-orthodox. In some ways, he told about 50 in the panel audience, an unauthorized biography has the benefit of not having the, “subject standing over your shoulder as you do it.” 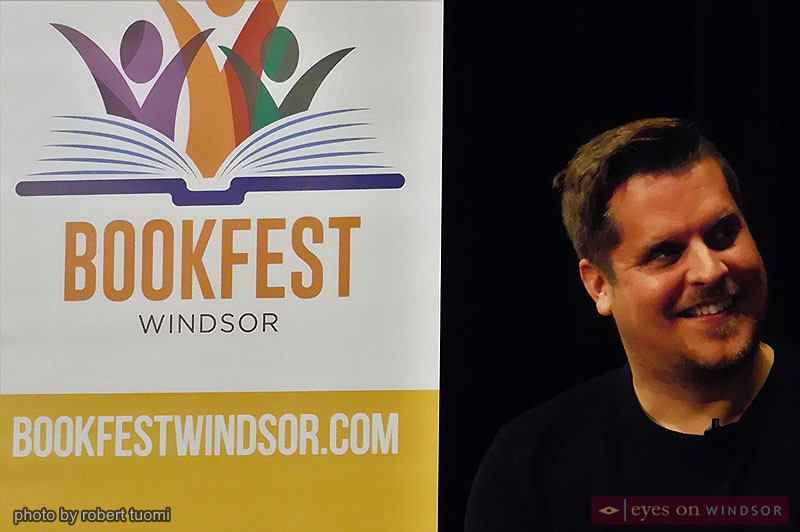 The Never-Ending Present is also, he says, somewhat “un-sanitized,” in the sense he could include content a subject may forbid. Attesting to his journalistic nature, Barclay went with the best information he had, sometimes finding out it wasn’t always all that good.

In one case, concerning a meeting in which one of the principals provided the details, after the book was published another in the room denied everything, but, agreed, Barclay’s account was probably alright.

The unorthodox nature of the book is its constant changing between biographic and thematic. It starts off as chronological. Its second chapter tells a story, a format that continues throughout with each thematic chapter unique in its own right, including one on hockey.

Why he wrote the book at all is interesting in itself. He believed that the band deserved better than an “abc” type of biographical account, quickly printed to capture the interest of the Hip’s fans.

Over its 30 years as a band, the Hip chalked up a large army of aficionados, as evidenced by its domestic record sales. Only a few Canadian bands have sold three million albums. The Hip did it three times. And while the group is largely known as a Canadian treasure, it gained considerable support in pockets of the United States. Panel host, Bell Media radio personality Dan MacDonald remembers seeing the group in Grand Rapids and being surprised at how many of the fans had painted Canadian flags on their foreheads. 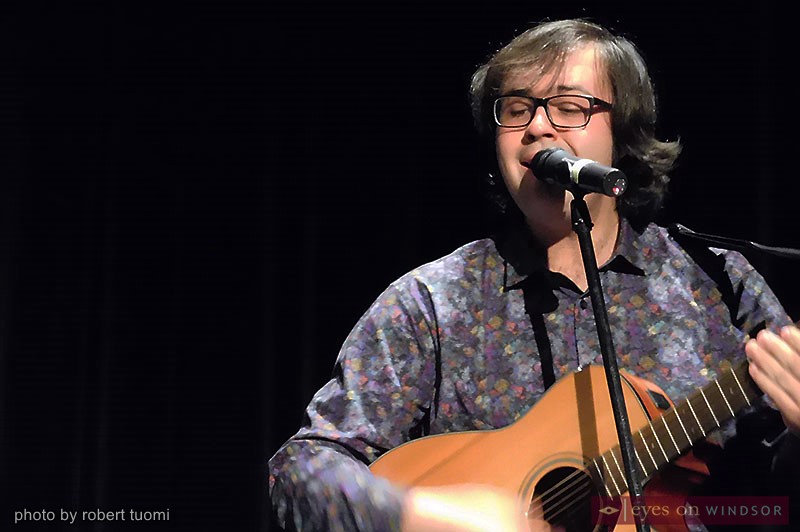 Allesandro Rotondi performing Tragically Hip classics during a panel discussion of Michael Barclay’s book, The Never-Ending Present a biography of Gord Downie and The Tragically Hip, at Bookfest Windsor inside the Capitol Theatre on Oct. 20, 2018. Photo by Robert Tuomi / Eyes On Windsor.

No discussion of the Tragically Hip could be done without some element of their music. This was provided by University of Windsor music student Allesandro Rotondi. Although listeners of CKLW Radio might not know it, Rotondi wrote and performed the theme music for the station’s Mike and Lisa morning show.

At the beginning and end of the panel he performed four Hip numbers including the highly popular “Ahead by a Century.” 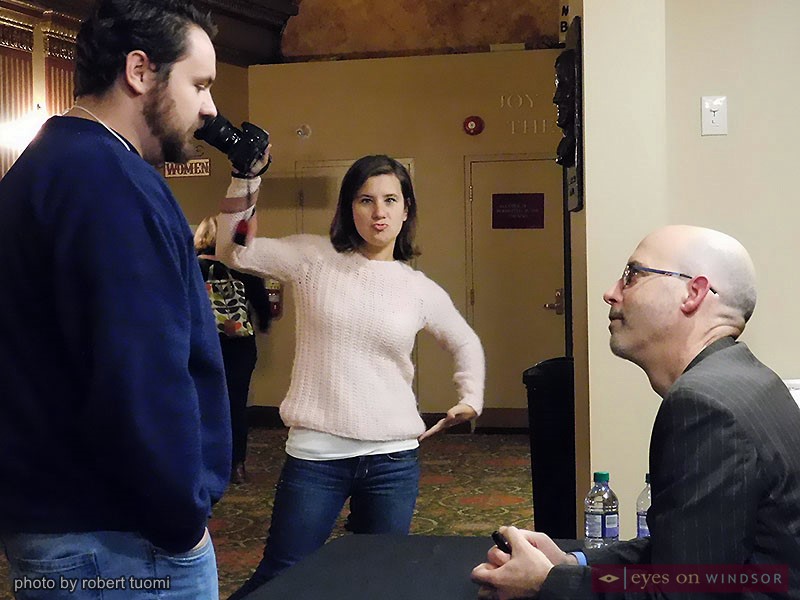 Author Michael Barclay (right) discussing his book with a Bookfest Windsor attendee on Oct. 20, 2018. Bookfest Windsor photographer Sanja Tabor (centre) has some fun on the opposite end of the camera lens. Photo by Robert Tuomi / Eyes On Windsor.