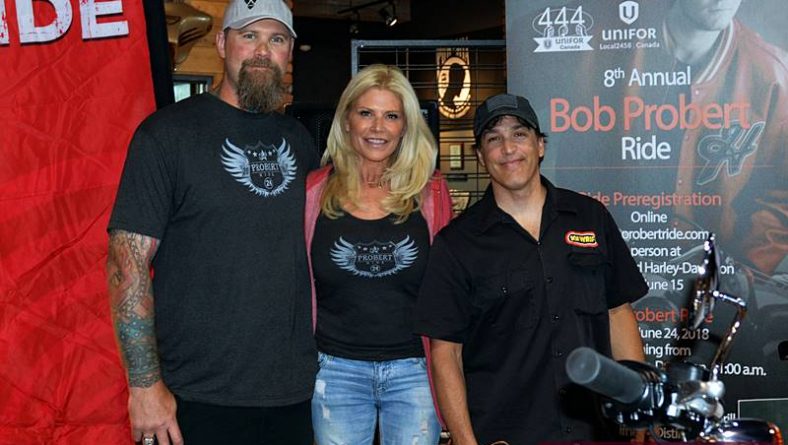 The 8th Annual Bob Probert Memorial Ride announced that former NHL enforcer Scott Parker and Detroit’s WRIF radio personality Meltdown will lead the motorcycle ride as this year’s Road Captains. The announcement was made at a media conference held at Thunder Road Harley Davidson in Windsor, Ontario, on Wednesday, May 30, 2018.

“This year we have double the honour of naming not one but two road captains, it brings me great pleasure to announce ‘The Sheriff’, former Colorado Avalanche and San Jose Sharks right winger, Scott Parker as ride captain,” Bob’s daughter, Tierney Probert, announced. “Joining us also, is Detroit radio personality, from WRIF, you may recognize him from last year’s ride and a few rides before that, please welcome Meltdown.” 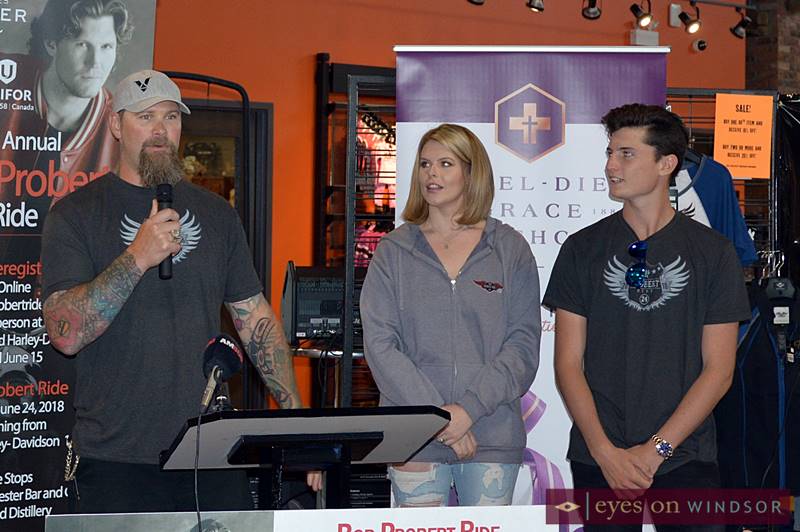 Former NHL enforcer, Scott “The Sheriff” Parker (right), addresses the media after he was announced as co-captain for the Bob Probert Ride, with Probert Siblings, Tierney (centre) and Jack (right), by his side. Photo by Eric Bonnici / Eyes On Windsor.

Scott Parker said he was glad to support the ride and shared a funny story about an encounter with Bob Probert during an NHL game early in his career. “I unfortunately fought Bob back in the day when I was twenty years old,” explains Parker. “He was the old man, I totally looked up to him, he was my idol. One game I asked him early in the game (to fight) and he said ‘no kid not right now’. So, I said ok sir. In the third period, I felt tap-tap, I turned around and he said it’s time kid. I was more giddy and happy to do it rather than think about what I had to do. Unfortunately, he hit me a few times and I got sent down that night. It was a learning experience.” 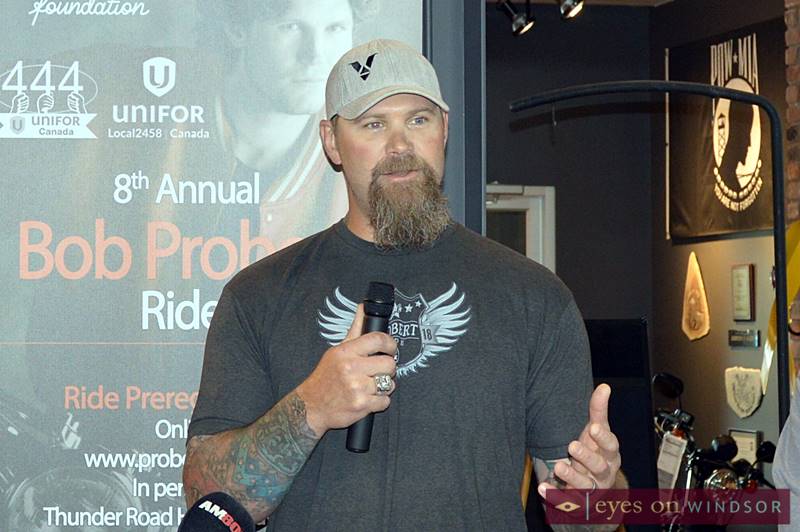 Former NHL Stanley Cup Champion, Scott Parker addresses the media, after being announced as the 8th annual Bob Probert Ride co-captain on May 30 ,2018. Photo by Eric Bonnici / Eyes On Windsor.

Parker grew up playing hockey in Alaska, went on to play in the Western Hockey League for the Kelowna Rockets. Scott was with the Rockets when he was drafted into the NHL by the New Jersey Devils, he started his career with the Colorado Avalanche in 1998 and was a member of their 2001 Stanley Cup Championship. Scott was acquired by the San Jose Sharks in 2003 and returned to the Avalanche in 2006, where he played two more seasons before retiring in 2009.

In retirement, Scott and his wife Francesca opened the Lucky 27 Barbershop in Castle Rock, Colorado. The couple also active philanthropists, they started a charity called “Parker’s Platoon” which is dedicated to helping military veterans transition from military to civilian life. 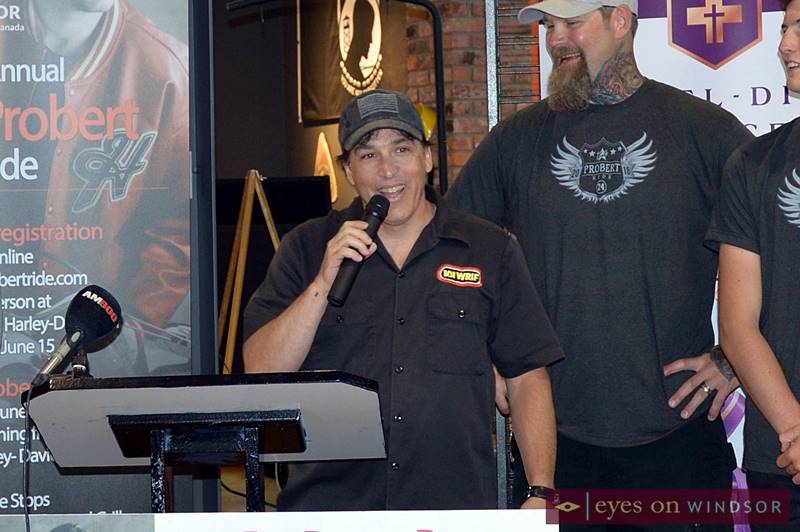 Scott will be joined by co-road captain, WRIF’s Meltdown. Blessed in the personality department, Meltdown, has been rockin’ with WRIF for over 23 years. Although he grew up in Buffalo, Meltdown says, “I was Made in Detroit.” Meltdown is a good friend to the Probert family and a three time ride participant. His fantastic sense of humour shined during the press conference.

Speaking immediately following Scott, Meltdown took the podium and looked way up at his co-road captain. Meltdown is obviously very short. “I guess you wanted somebody small too,” Meltdown said jokingly. 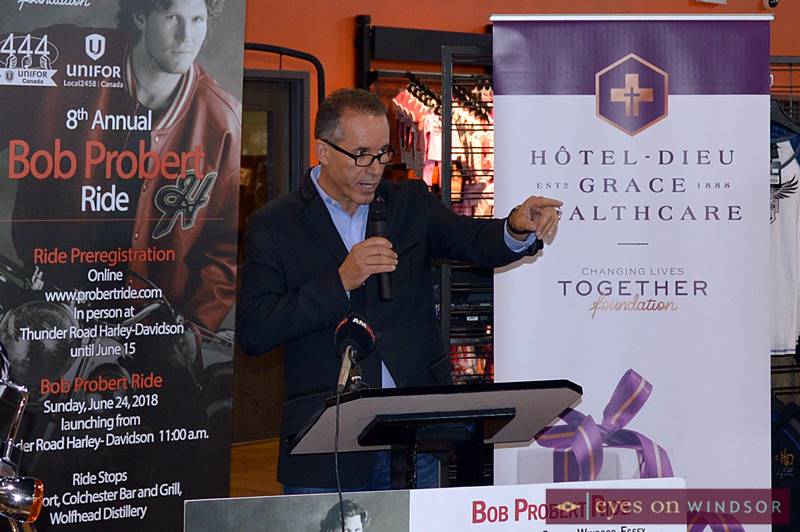 Mara, said, “you two gentlemen really add a level of class (to the Bob Probert Ride), Parker a Stanley Cup Winner, and Meltdown you’ve been part of the Rock N Roll scene in this community for over 23 years.” 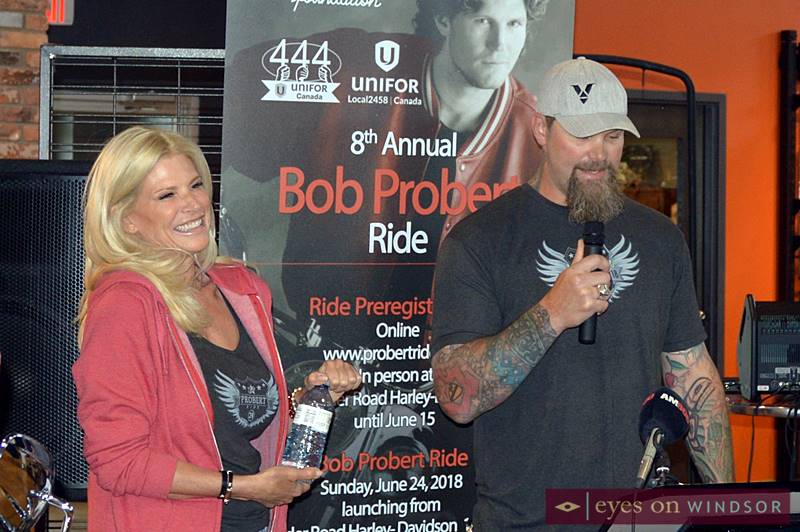 “Choosing a road captain for the ride each year never comes easy. Having been part of the NHL family, I am always overwhelmed by the support we receive each year from current and retired players,” explained Dani Probert. “I know Big Bob is smiling HUGE today.”

“This past year, 2017, we’ve had over 1300 men and women from our community referred to our cardiac wellness program,” said Bill Mara. It operates in Leamington, with a small satellite location, and the main campus in Windsor at Hotel Dieu Grace Healthcare. “By far this is the highest number we’ve had to date since the program began. We’re very excited with your efforts as part of this Probert Ride, we plan to open up a third location, another satellite location.”

Tecumseh Mayor Gary McNamara was in attendance during the press conference. “I want to acknowledge Mayor Gary McNamara,” said Bill Mara. “On the 24th we will formally announce the location of our satellite location that will be located somewhere in the Town of Tecumseh.” 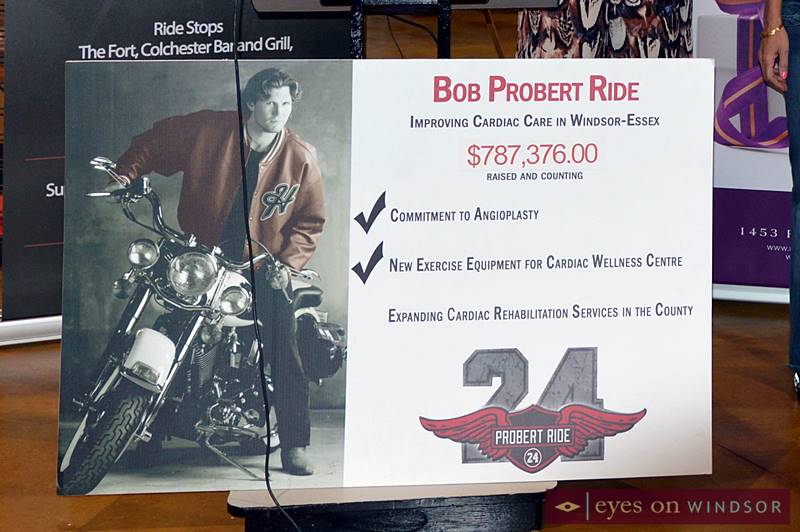 Sign displayed during the Bob Probert Memorial Ride media launch at Thunder Road in Windsor shows funds raised over the years, 2 goals have been achieved, and another goal is currently being strived for by the ride’s organizers in support of improving Cardiac Care in Windsor-Essex. Photo by Eric Bonnici / Eyes On Windsor.

Over the past seven years, the Bob Probert Ride has supported Cardiac Wellness programs in Windsor-Essex. A sign was on display during the media conference showcasing the amount of funds raised by the ride so far and the projects it has supported. “You can see that to date this important legacy to honour Bob’s memory and to make improvements in our community has raised almost $8,000,000 and you can see the two check marks about the projects we’ve completed. We look forward to putting a checkmark on that third one, we have over $94,000 in sponsorships and donations, leading up to June 24.” The eight year ride total is on track to hit the $900,000 mark.

Unifor locals 2458 and 444 have been supporters and major sponsors of the ride since it’s inception. Tullio DiPonti, President Unifor 2458, and Dave Cassidy, President Unifor 444, spoke on behalf of their respective locals during the media launch. The ride is also supported by a very long list of generous local sponsors. 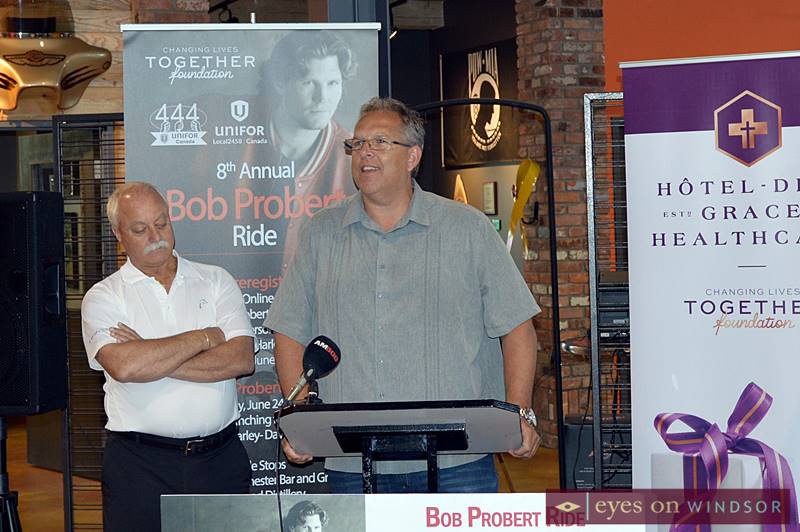 Tullio DiPonti (left), President Unifor 2458, and Dave Cassidy, President Unifor 444, speak on behalf of their respective locals, sponsors of the 8th Annual Probert Ride, during a media conference on Wednesday, May 30, 2018. Photo by Eric Bonnici.

This year the Probert Ride was also fortunate enough to receive a donation coming from the proceeds raised by the annual Bridal Ball held at Ambassador Golf and Country Club. Organizers from the event, Sarah Taylor and Diane Farquhar presented a $10,000 check to the Bob Probert Ride during the media conference. “We decided we would like to support Dani and Cardiac Wellness at the hospital,” explained Sarah. “It was something really important to Diane, in honour of her father.” 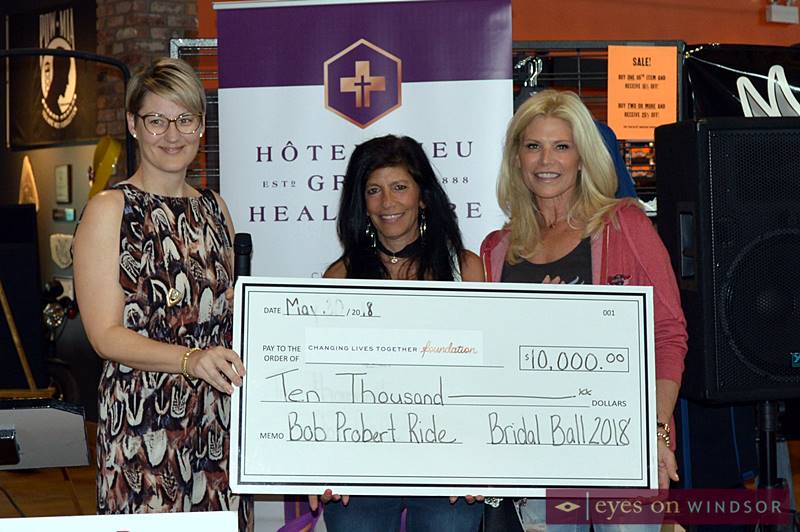 Organizers of the annual Bridal Ball, Sarah Taylor (right) and Diane Farquhar (centre) present a $10,000 check to the Bob Probert Ride, accepted by Dani Probert (right), funds were raised at their event back in April of 2018. Photo by Eric Bonnici / Eyes On Windsor.

This year’s ride is set to go on June 24 (yup that’s Bob’s jersey number) and will launch from Windsor’s Thunder Road, with stops at the Fort Fun Centre in Amherstburg, Colchester Bar & Grill, Wolfhead Distillery and returns to the final stop, new this year, the Ciociaro Club where riders and their passengers will be able to enjoy refreshments and purchase food.

Participants can register in person at Thunder Road Harley Davidson in Windsor, located at 2139 Huron Church Road, during regular business hours up until June 15th.

For more information, to register, or to make a donation please visit www.probertride.com, www.facebook.com/probertride, or the Bob Probert Ride listing on the Eyes on Windsor Events Calendar. 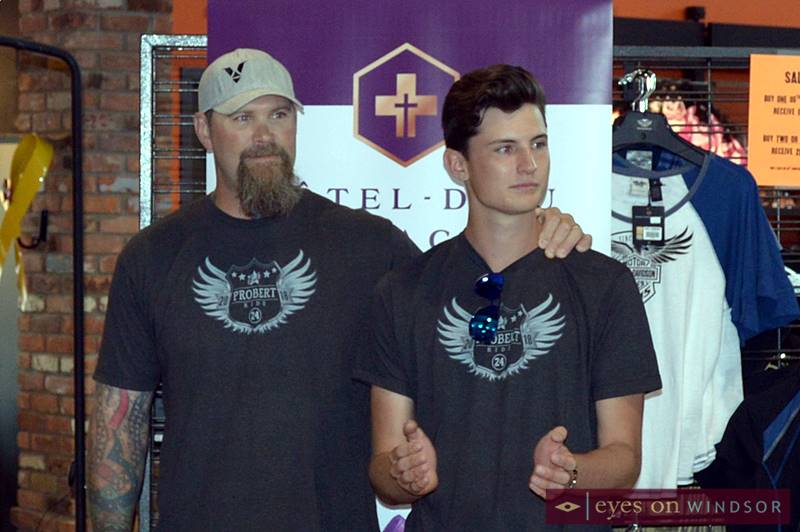 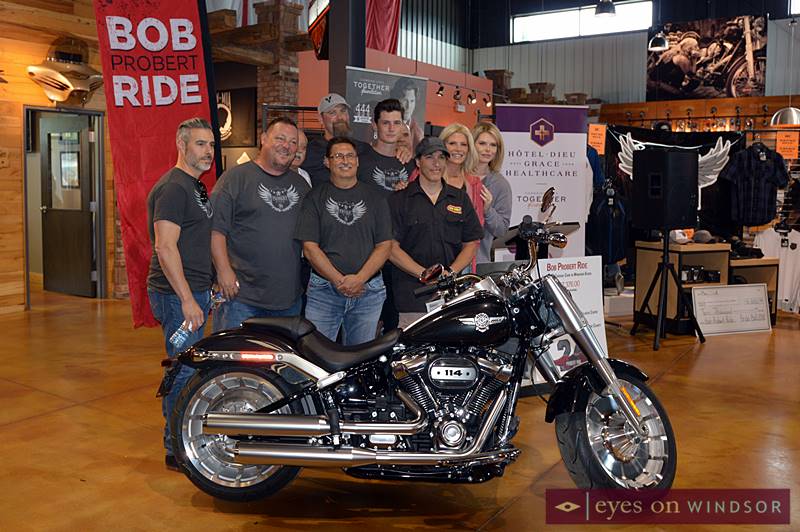 Bob Probert Ride organizers and participants shown during a media conference announcing details of the 2018 ride. Photo by Eric Bonnici / Eyes On Windsor.