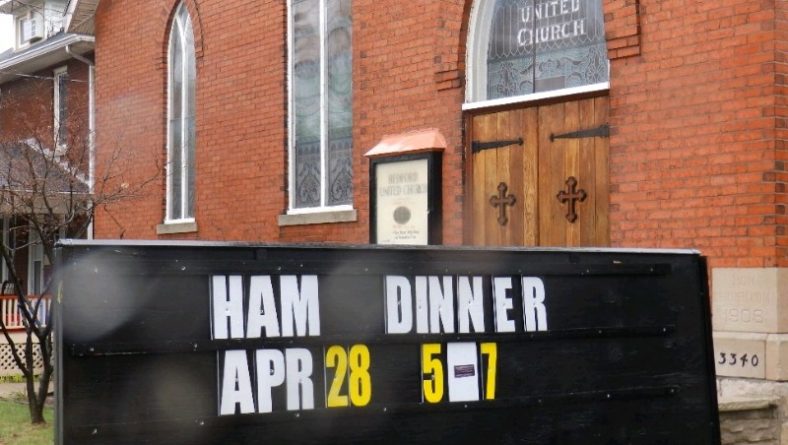 (Photo above: A sign outside of the Bedford United Church in Old Sandwich Town advises passers-by of their upcoming ham dinner. Photo by Robert Tuomi / Eyes On Windsor.)

This annual dinner features ham and all the fixings. The meal will start at 5pm and last for two hours. Admission is $13 for adults and $6 for children. The church is fully accessible and there is parking behind the building, off of Russell Street.

Bedford United is one of the city’s most infamous churches. It gained its notoriety back in the Prohibition era of the 1920s. Because of its pastor’s role in trying to curtail the sale of forbidden spirits it is a mainstay of Mark Baker’s Rum Runners Tour.

His exploration of the city’s rich past visits sites in Walkerville and Old Sandwich. In the oldest part of the city, history is brought back to life at Mackenzie Hall’s courthouse and then at Bedford. There his guests are greeted by a member of the anti-liquor Women’s Temperance Movement. She quickly sings the praises of the church’s Reverend John “Leslie” Spracklin.

Back in the day, Bedford was known as the Sandwich Methodist Church and the home of the “Fighting Parson.”

Spracklin earned the moniker by being a one man army of sorts fighting those in the illicit whisky trade. It was not unusual for him to take to fisticuffs with the city’s bootleggers and blind pig operators.

Photos of the Reverend still adorn the walls of the Church.

With the city’s bootleggers all but history, the Church has found a new way to become famous. It is now a provider of beloved meat pies, prepared by church folk in its fully outfitted basement kitchen. Sold at various events, the money raised helps pay for church operations.

Sandwich is an area rich in historic churches. Our Lady of the Assumption on Huron Church Road is one of the oldest Catholic sites in Canada with its roots going back to 1728. Its first chapel was built at what was then called “La Pointe de Montréal,” not far from where the current church stands, next to the Ambassador Bridge. Although the Church is now closed for renovations its grounds are open to visitors.

During the period of the Underground Railroad, Windsor was one of the first Canadian stops for many an American slave seeking freedom. Those who made the trek north often turned up at Sandwich First Baptist, a fixture at 3652 Peter Street.

Finding freedom in Canada was not that easy. Slave hunters were on the move trying to return escapees to their southern plantations. New arrivals would be hidden in the church’s basement. A tunnel to the riverfront provided an exit should the hunters turn up. 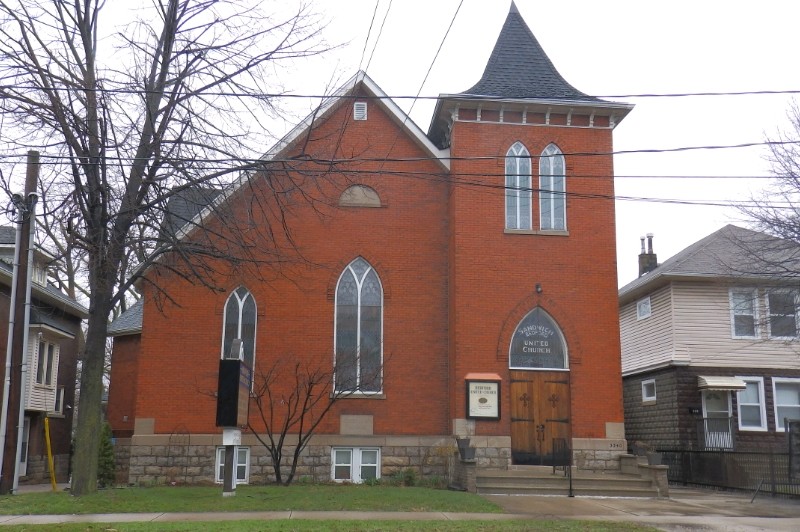