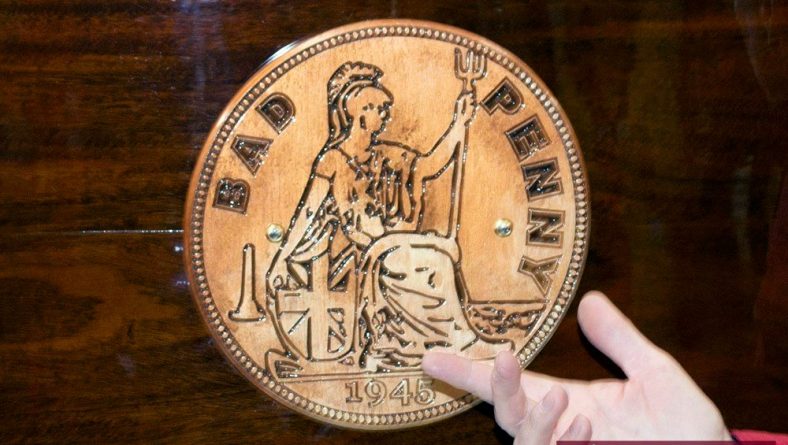 On April 29, 1945, Windsor’s Robert (Bob) Upcott piloted WWII Lancaster Bomber “Bad Penny” on the first test mission of Operation Manna, a humanitarian effort to the Netherlands to save and feed a starving nation.

Did You Know Windsor’s Lancaster Bomber Terrified A Teenage Boy Exactly 72 Years Ago?

A desperate Dutch Boy named Pieter Buttenaar was risking his life attempting to sneak into a Nazi camp to steal food for his starving family. Suddenly, Bad Penny rumbled overhead and the boy feared bombs were about to drop. Buttenaar jumped into a ditch to hide but to his surprise crew members were waving to him from the low flying plane.

Instead of dropping bombs they were dropping food from the sky!

Today, April 29, 2017, is the 72nd anniversary of the first flight of Operation Manna, flown by Windsorite Bob Upcott and his Lancaster crew. These missions not only delivered food, but also hope that liberation and freedom would follow.

This is the same Lancaster Bomber that was on display for years at the Jackson Park World War II Air Force Monument.

After being on display for decades the Lancaster Bomber began to decay and was removed in 2005. The bomber is currently being restored at the Canadian Historical Aircraft Association CH2A hangar located at Windsor International Airport. During last year’s anniversary a display honouring Operation Mana was erected at the CH2A hangar. The public can visit the CH2A during hours of operation to view both the partially restored Lancaster Bomber and Operation Mana Display. 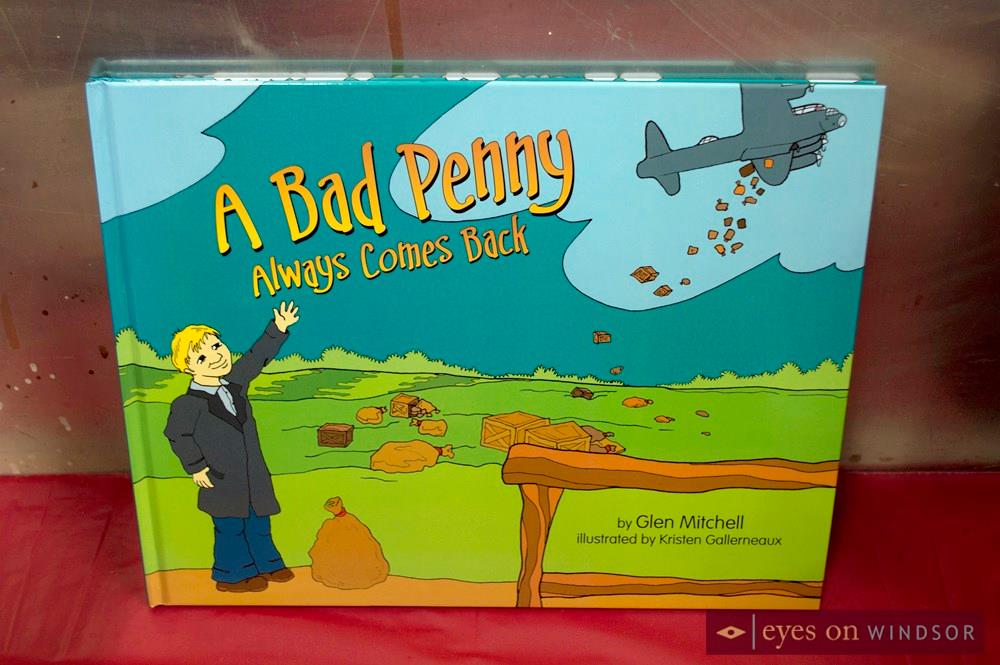 The children’s book, “A Bad Penny Always Returns” was inspired by Bad Penny’s Operation Mana flight. The book is being sold to raise funds to help restore the Lancaster Bomber at the CH2A hangar. The story is about the first mission of Operation Manna, the Windsor area crew who flew it and the young Dutch boy whose prayers were answered when food fell from the sky. Today Pieter Buttenaar, who is in his late eighties, immigrated to and lives in Canada.

Michael Beale along with the help of many friends have spent the last ten years restoring a classic 1949 17.5-foot Shepard Old Mahogany Woody which was christened and named at his home while surrounded by guests on April 29, 2016. Beal and close friend Dave Upcott affixed the naming plaque “Bad Penny” to this newly restored beauty. Dave is the son of WWII Lancaster Bomber pilot Cpt. Robert (Bob) Upcott. “The most important part of this boat is the fact that we’ve named it Bad Penny,” explained Beal. The tribute is to remember the crew of the Bad Penny. 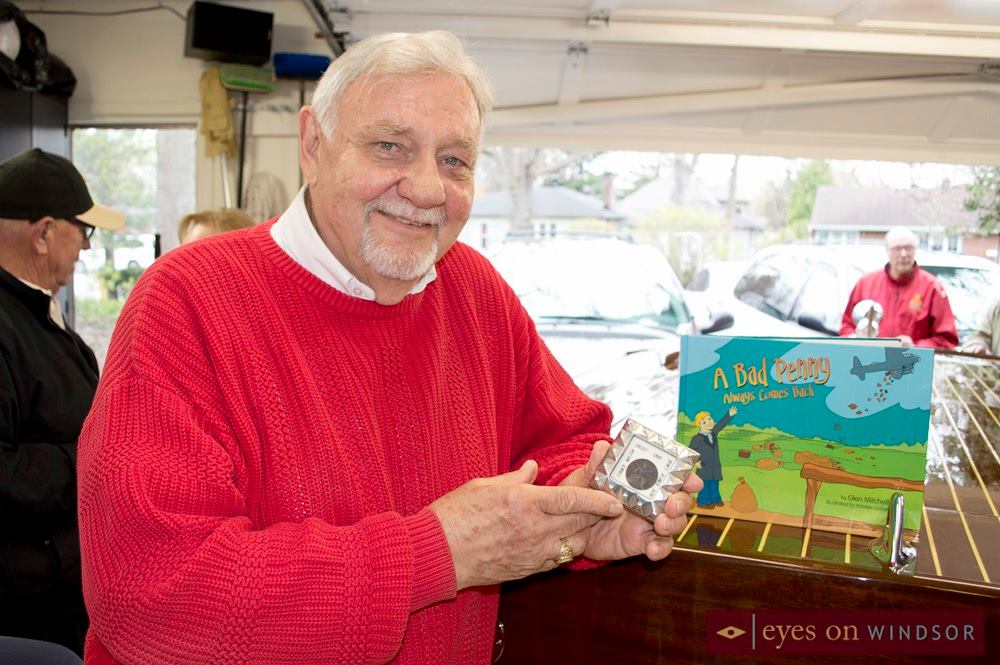 Cpt. Upcott carried 3 pennies with him during the war. David Upcott’s most prized possession is one of those pennies. Michael Beal and Michael Kohuch, both who have been involved with the Canadian Historical Aircraft Association, have the other two. “If you try to buy that penny on eBay the price tag is 45 cents,” joked Beal. “But to us they’re priceless!”

The site in Jackson park where the Windsor Lancaster Bomber once stood is currently occupied by weather proof replicas of a World War II Hurricane and Spitfire. They were replaced by the Canadian Historical Aircraft Association CH2A ten years ago. The Essex Memorial Spitfire Committee recently donated three mounted signs to the City of Windsor and it’s residents located at The Jackson Park World War II Air Force Monument on November 20, 2016. The signs explain the story behind these aircraft and their connection to the Windsor Essex community. Most importantly the signs and entire aircraft monument is meant to honour those who built, flew, fought and died in them. 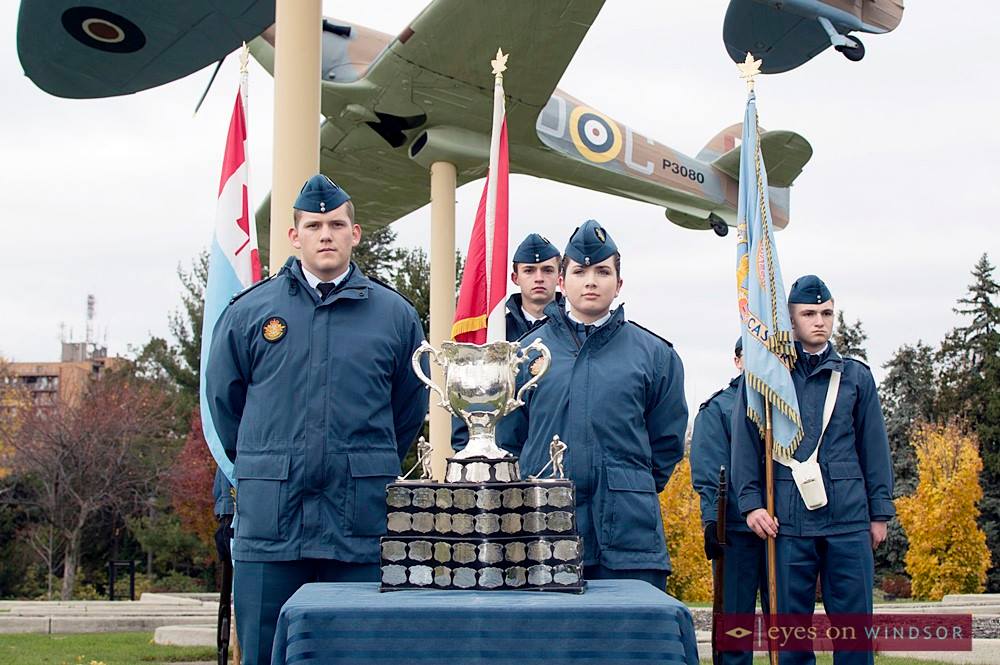 Representatives from The Windsor Spitfires hockey club and 2017 Memorial Cup Host Committee were in attendance during the unveiling of the signs. The Canadian Hockey League (CHL) junior hockey championship Memorial Cup was also on display. The Memorial Cup was originally donated by the Ontario Hockey Association in 1919 in honour of Canadian military who died fighting in World War I. In 2010 the trophy was rededicated to honour all soldiers who died for Canada in any conflict.

The Memorial Cup, the aircraft monuments in Jackson park, and Bad Penny’s tale of dropping food instead of bombs during Operation Manna are all important stories and tributes to our veterans. 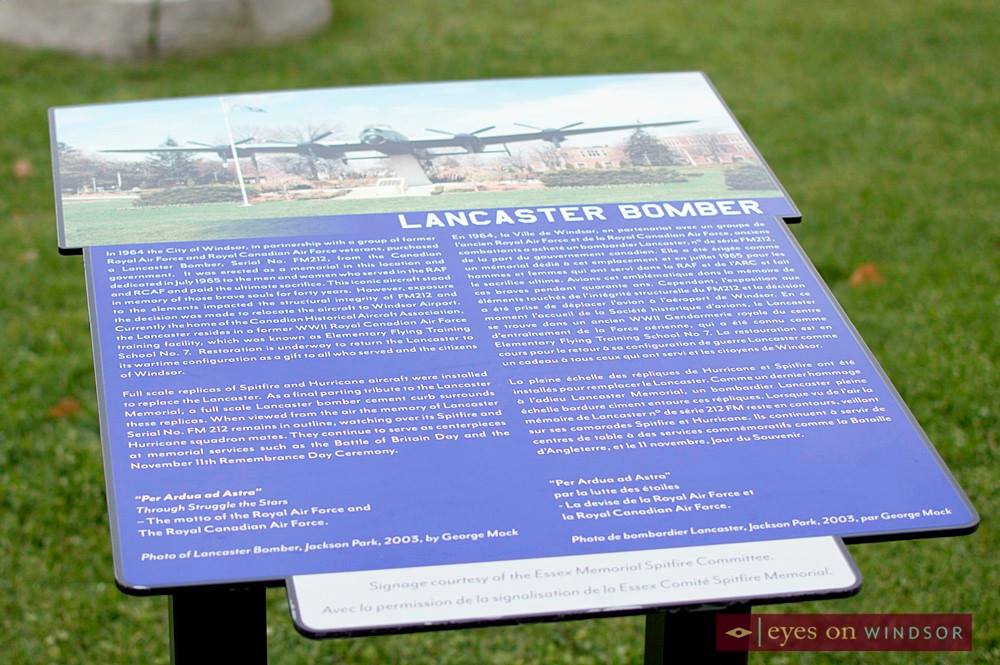