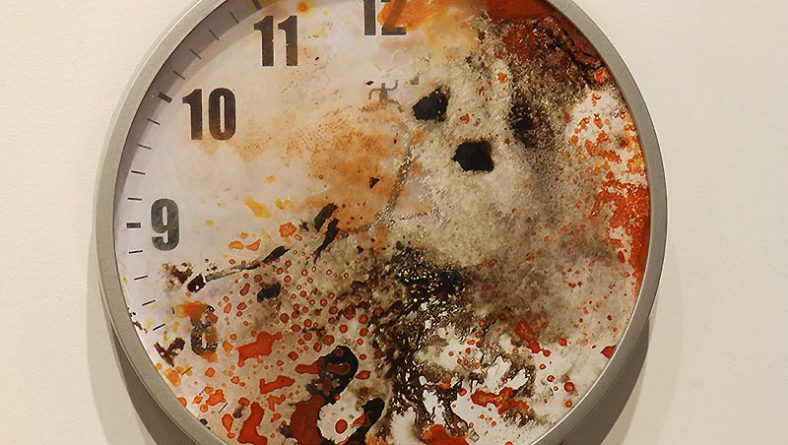 It is said that time is fleeting. For local instructional artist José Seoane’s TimeRoom, an exhibit at the gallery of the University of Windsor’s School of Creative Arts in downtown’s former Armouries, time stretched out over four days. The presentation opened on Tuesday and closed on Friday. The reason, of course, is that so many other events are going on in the building as part of the current NoiseBorder Festival.

(During the TimeRoom exhibit at the University of Windsor School of Creative Arts Noiseborder Festival, the windows of many of Jose Seoane’s clocks obscured the movement of time going on in the background. Photo above by Robert Tuomi / Eyes On Windsor.)

Seoane, a Cuban/Canadian multi-disciplinary artist, and an instructor at the School, had put together a unique look at clocks as a representative of things other than time.

A number of physical clocks were hung on the gallery’s walls. Of these, only a few were visibly telling time. Some were in a fog, so to speak, others were obscured with painted images. Others, using projection technology, had motion behind their arms such as swimming fish. One wall featured projected orderly rows of animated clocks. 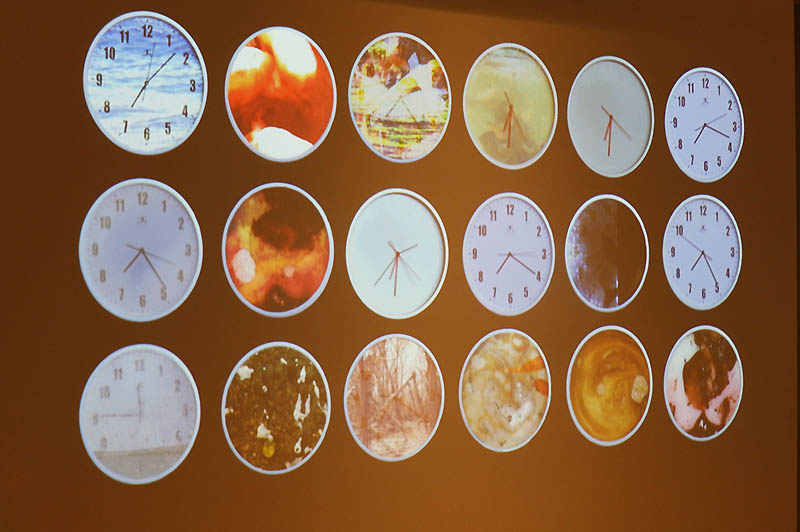 In José Seoane’s TimeRoom, during the annual Noiseborder Festival, some clocks told the time, although none were synchronized. Others offered other images. Photo by Robert Tuomi / Eyes On Windsor.

Promotional material talked of his assembly of timepieces as not being a typical representation of counting seconds, but rather a, “symbolic element in our lives occupying ‘space.’”

Beyond being a creative look at other aspects of time, it was also an investigation of, “ideas around transculturation and identity within the post-modern condition.”

On his website, Seoane admits to a strong background in painting. Thus the use of clock props was, for him, a new avenue of artistic expression.

He describes the move as, “extending my practice into sculpture and time based media to produce a series of hybrid combined works deconstructing space and time. I am interested in the conceptual fusion and connection between media through the use of diverse materials and languages.”

Seoane has his more traditional work included in the collections of a number of museums, including the Thames Art Gallery in Chatham-Kent and others in Austria and Cuba, to name a few. 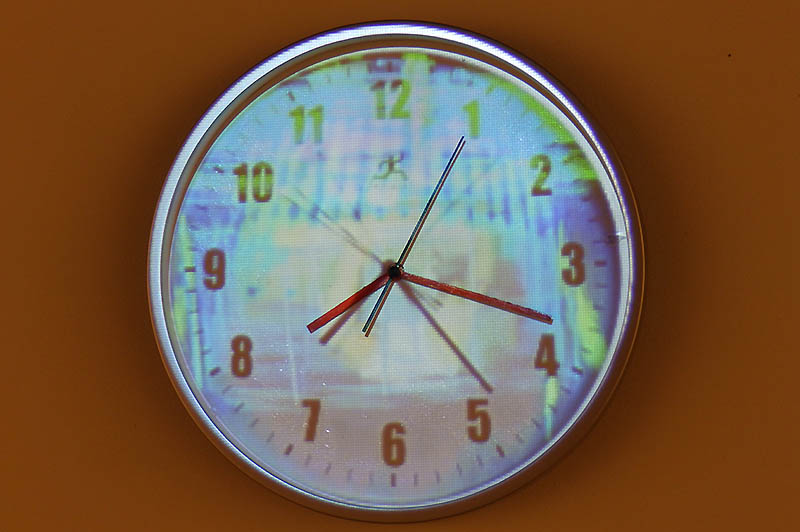 Using clever projection technology, Seoane had motion on the face of a few of his clocks of his Time Room exhibit during the University of Windsor School of Creative Arts Noiseborder Festival. Photo by Robert Tuomi / Eyes On Windsor.

Scheduled to continue until June 1, highlights will include a variety of exhibits and performances such as Sigi Torinus, Brent Lee, Meaghen Quinn’s X Vitro on May 28 at 6pm. Luminous Flux I will open May 29 at the Gallery. At 7:30pm that day David Bergeron, Martin Schiller and Brent Lee will perform No Net Techno.

The next day, at 6pm, there will be a Sonic Arts student concert followed by David Bergeron and Imogen Wilson performing Virtual Mentality.

All events are free of charge.

Please visit the Eyes On Windsor events calendar for more information about the Noiseborder Festival.