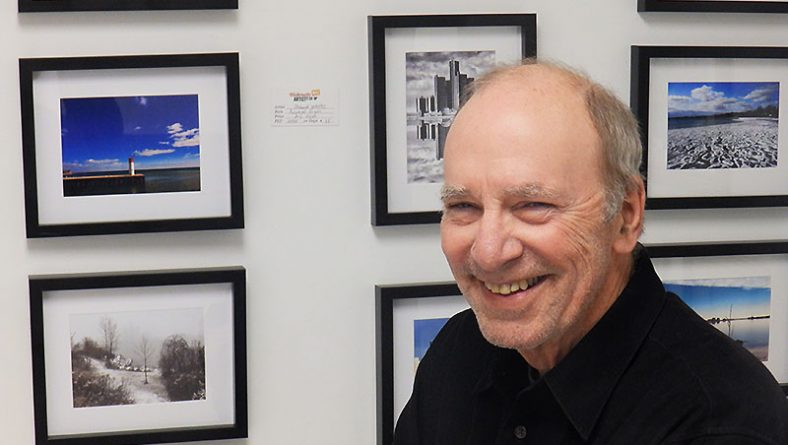 (Howard Weeks with his framed landscape photography on display at the Walkerville Artists’ Co-op on March 27, 2018. Photo by Robert Tuomi.)

At a Walkerville storefront, on the sunny side of the street, a collective of artists have hung their paintings, carefully placed their sculptures and proudly displayed their other objet d’art, all on sale.

Recently the participants in the operation, known as the Walkerville Artists’ Co-op, at 1974 Wyandotte Street, grew to 36 artisans with the arrival of photographic landscapes by Howard Weeks.

Weeks, son of one of Windsor’s most popular mayors (Bert Weeks), is now in his retirement after a working life infused largely with photographic assignments, much of it portraiture. His first brush with the profession came during a trip to Montreal while in elementary school. There, with a box camera, the most rudimentary of picture-taking devices, he set out to photographically capture the multi-colours of its famed Mount Royal district.

Of late he prefers landscapes with a particular interest in showcasing his beloved Windsor and its American neighbor Detroit. Although his display includes colour and black and white scenes from points as far as Port Dover, his shots of Detroit’s waterfront Renaissance Centre are his best sellers. Sales have been good, so too is his pricing, at $25 for each framed print.

Find out more about Howard Week’s photography at https://www.facebook.com/howardweeksphotography

WAC is a rather eclectic collection of the efforts of local talent. Its walls and cabinets are graced with one-of-a-kind originals in a number of mediums, from pottery to encaustics, the practiced art of creating images using beeswax.

Initially the co-operative venture started in Pillette Village where it was known as the Back Room Gallery. Now, it is part of the growing number of galleries and art shops that make up Walkerville’s creative side.

For more information on the gallery, visit www.walkervilleartistsco-op.com